The three people killed were identified as biologist Dewey Stockbridge, wildlife technician Brandon White and veterinarian Bob Dittmar, according to a Sunday press release from the Texas Parks and Wildlife Department.

“No words can begin to express the depth of sadness we feel for the loss of our colleagues in this tragic accident,” Carter Smith, executive director of TPWD, said in the statement.

“These men were consummate professionals, deeply liked and highly regarded by their peers and partners alike for the immense passion, dedication, and expertise they brought to their important work in wildlife management and veterinary medicine,” he said.

The helicopter pilot, a private contractor, survived the crash and was transported to a hospital in El Paso, according to the statement. TPWD did not release any information on the cause of the crash. 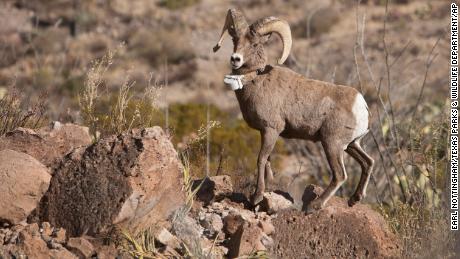 The group was flying over TPWD’s Black Gap Wildlife Management Area in Brewster County to conduct research on the desert bighorn sheep. The area borders Big Bend National Park and spans over 100,000 acres, according to TPWD, .
Texas wildlife officials have been instrumental in restoring numbers of desert bighorn sheep after the population decreased due to disease and unregulated hunting, according to TPWD, which estimated the bighorn’s population in Texas at 1,500 in 2018.
Stockbridge worked on conservation of the species for several years. In 2016, during an interview with Outside Magazine, he spoke on the importance of managing the herds.
“When you reintroduce desert bighorn in a landscape such as Elephant Mountain here, it’s really a trickledown effect,” he said. “There are numerous other species that benefit from them being reintroduced to certain mountain ranges.”

Officials conduct aerial surveys throughout the year to monitor population size and observe the animal’s behavior.

Dittmar joined the TPWD as the agency’s first-ever staff veterinarian in 2014, according to the agency. Previously, he assisted in various projects with the agency and was in private practice in Kerrville, northwest of San Antonio.
“My wife’s telling everybody that I’m going to be making sure that my grandkids and great grandkids have wildlife to enjoy in the future,” Dittmar said in an interview with TPWD in 2014. “I’m going to be a part helping to ensure that our wildlife populations are healthy, and looking at it more from a veterinary medical standpoint than strictly a management and biological standpoint.”

“Our hearts ache today for those who died in this tragic accident,” Texas Governor Greg Abbott said.

CNN’s Melissa Alonso and Chandler Thornton contributed to this report.