The center is one of the places where election workers have been counting votes from the 2020 general election, which includes the race for president.

Text messages reveal that the men were concerned about the tallying of votes at the convention center, prosecutors said, according to KYW.

Antonio LaMotta, 61, and Joshua Macias, 42, both of Chesapeake, Virginia, were arrested Thursday night outside the center on suspicion of carrying handguns in Pennsylvania without permits, authorities said.

Philadelphia police said they found the men Thursday night after receiving a tip that people with firearms were heading to the Pennsylvania Convention Center in a silver Hummer truck.

Officers found a silver Hummer a block from the center — parked and unoccupied — around 10:20 p.m. Thursday, about seven minutes before finding the men, who acknowledged the Hummer was theirs, police said.

Both men were carrying loaded handguns, and police found an AR-type rifle in the Hummer, authorities said at a news conference Friday. About 160 rounds of ammunition were found in the weapons and the vehicle, authorities said.

Stickers and a hat with logos of the QAnon conspiracy movement were found in the vehicle, Philadelphia District Attorney Larry Krasner said.

LaMotta and Macias were charged with having a concealed firearm without a license and carrying a firearm on a public street or public property, Krasner said.

“This alarming incident is still very much under investigation regarding additional charges,” Krasner said.

LaMotta and Macias were arraigned Friday night, and a judge set bail at $750,000 each, Krasner’s spokeswoman Jane Roh said.

Details about the alleged fake ballots — including where they came from, whether they were found in the Hummer, or what was marked on them — weren’t immediately available.

It wasn’t immediately clear whether the men had legal representation. CNN has sought comment from the Philadelphia Public Defenders Office and LaMotta’s relatives.

A woman who was traveling with the men has not been arrested, Krasner said. 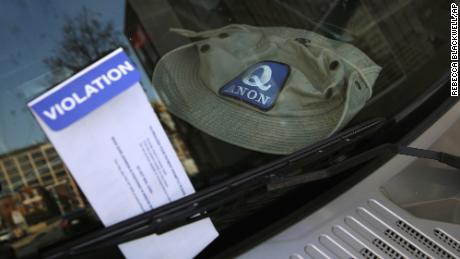 Suspect said he needed to take leave to go to Philadelphia, employer says

LaMotta told his work supervisor a few days ago that he needed leave for an “assignment” in Philadelphia, according to the CEO of the company that employs him.

Hollimon told CNN that LaMotta this week told his supervisor he needed to take leave for the “assignment” in Philadelphia that was not assigned through the company.

Hollimon said he did not know why LaMotta was in Philadelphia and emphasized that he believes he is “a good guy.”

“He’s a very devoted guy. I’ve never had an issue with him,” Hollimon told CNN. “He’s not a threat.”

LaMotta’s website, which has since been taken down, described him as a “crisis response, security, fugitive recovery agent, bodyguard, security contractor.”

The website included his date of birth and hometown, both of which matched information shared by the Philadelphia District Attorney’s Office.

The website displayed pictures of him posing beside a silver Hummer. It also detailed his work experience, including his work at Nationwide Investigation & Security, as well as documents related to a military discharge.

The website detailed other work experience, including for the Virginia city of Chesapeake, where he lives.

LaMotta was a facilities maintenance technician for the city from August 2014 to May 2019, Chesapeake spokesman Heath Covey told CNN. Cover said he could not provide details about why LaMotta left the job.