In a letter to his son, King Felipe VI, Juan Carlos wrote that he made the decision to leave “in the face of the public repercussion that certain past events of my private life are generating.”

A Royal Household spokesperson told CNN after publication of the letter on Monday that the former monarch “has left already,” but declined to reveal where he has gone.

Earlier, his lawyer Javier Sanchez-Junco told CNN that Juan Carlos’ move out of Spain was imminent, insisting he didn’t know where the former King was headed.

Spanish and international media have reported on the alleged financial dealings of the former King, now 82, even before he abdicated in 2014, and on the efforts of his son to distance himself from his father.

King Felipe expressed ” heartfelt respect and gratitude” for his father’s decision to leave the country, according to a press release from the Royal Household.

“The King wishes to emphasize the historical importance that his father’s reign represents, his legacy and his political and institutional work for Spain and democracy; and at the same time he wants to reaffirm the principles and values ​​on which it (Spain’s democracy) is based,” the press release said.

In the letter announcing his departure, Juan Carlos wrote: “A year ago, I expressed my will and desire to stop performing institutional activities. Now, guided by the conviction to perform the best service to the Spanish people, their institutions and you as King, I am communicating my thoughtful decision to move, at this time, outside of Spain.”

“A decision I make with sadness, but with great serenity. I have been King of Spain for almost forty years and, during all of them, I have always wanted the best for Spain and for the Crown,” said the letter, published by the Royal Household.

Juan Carlos, who is now 82, is widely credited with helping to guide Spain to democracy after the long dictatorship of Francisco Franco. But in recent years, his image has suffered.

In 2014, he abdicated under a cloud of financial scandal and criticism of his elephant-hunting trip to Botswana during Spain’s financial crisis in 2012.

In March, King Felipe ended the annual public stipend paid to his father and renounced any personal inheritance from him.

Swiss prosecutors are currently examining documents that allege Juan Carlos may have received $100 million from Saudi Arabia’s king in 2008, a senior Spanish official with knowledge of the proceedings told CNN last month. 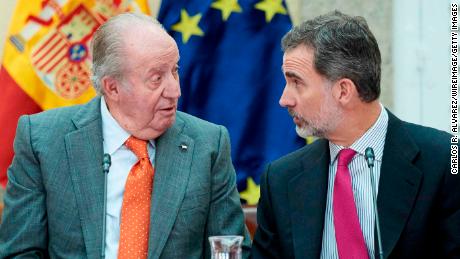 The official said the hypothesis is that the money may have been related to a contract for a Spanish consortium’s construction of a high-speed train between Medina and Mecca in Saudi Arabia.

The attorney general’s office in Spain said in a statement last June 8 that a Supreme Court investigation was focused on the high-speed rail project in Saudi Arabia — and that Juan Carlos’ name had come up in the case.

The former king’s lawyer said in a statement Monday that even though he is leaving Spain, Juan Carlos wanted to make public that he “remains at the disposition of [Spanish prosecutors] for any formalities or actions considered opportune.”