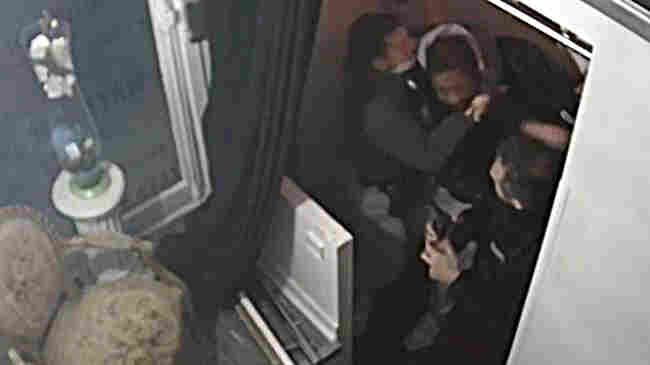 This video grab taken on Thursday from an AFP video shows CCTV camera footage, widely distributed on social networks, shows producer Michel Zecler being beaten up by police officers at the entrance of a music studio in the 17th arrondissement of Paris on Nov. 21. 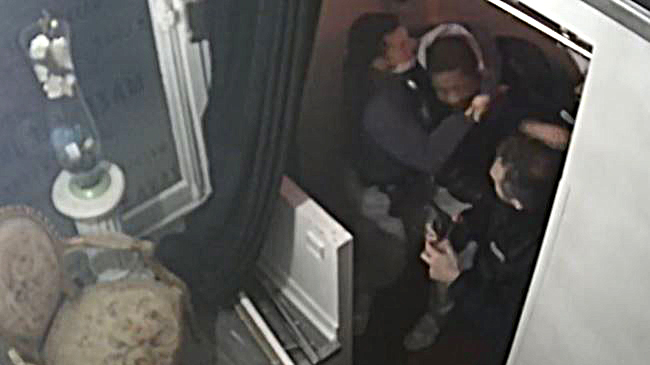 This video grab taken on Thursday from an AFP video shows CCTV camera footage, widely distributed on social networks, shows producer Michel Zecler being beaten up by police officers at the entrance of a music studio in the 17th arrondissement of Paris on Nov. 21.

Four French police officers have been suspended and are in custody after a video that shows them brutally beating a Black man was posted online Thursday.

The incident has provoked an outcry across France and comes as President Emmanuel Macron’s government is trying to push through controversial legislation that would restrict the filming of police. Civic and journalist freedom groups oppose the bill, calling it a shield for brutality.

Michel Zecler, a 41-year-old music producer, was not wearing a face mask — required under current COVID-19 measures — when police officers saw him walking in Paris last Saturday. As he tried to enter his music studio, the police officers pushed him through the doorway and pummeled him repeatedly with their fists and a billy club.

The beating stopped when others in the building came to Zecler’s aid, though police later threw a tear-gas canister through the window to force him to leave his studio and arrested Zecler and others.

The police were unaware they were being filmed by a surveillance camera.

The video was posted on social media by Loopsider, a French digital news outlet, and has been viewed more than 8 million times.

“I thought it was my last day,” Zecler, wearing an arm sling, told Loopsider in an interview.

Zecler spent 48 hours in jail after officers accused him of violence, resisting arrest and trying to take their weapons.

The video shows Zecler is clearly overwhelmed, and Zecler’s lawyer has told French media that a formal complaint has been filed against the police officers, who are also accused of fabricating evidence.

French Interior Minister Gérald Darmanin said on a news broadcast Thursday that the officers had “sullied the uniform of the Republic” and would be fired.

But he defended French police in general, arguing that the vast majority of security forces act professionally. Darmanin said there are fewer than 10,000 incidents flagged every year out of a total of roughly 3 million police operations.

The incident is feeding a groundswell of opposition to Macron’s security bill. The French president has been accused of veering far to the right on security matters.

An editorial in influential daily Le Monde said on Friday it’s too late for the interior minister to simply find the video “shocking.” The newspaper said he must address the grave leadership crisis within the French police and called for an immediate withdrawal of the security bill.