The Los Angeles Dodgers’ first matchup with the Houston Astros since the cheating scandal rocked the 2017 World Series champions was nothing short of a frenzy Tuesday night.

Benches would empty during Los Angeles’ 5-2 victory over Houston thanks to pitches thrown from Joe Kelly of the Dodgers toward Astros batters Alex Bregman and Carlos Correa.

Kelly buzzed the heads of Bregman and Correa in the sixth inning. He threw behind Bregman to cause a walk and his pitch to Correa was over his head. 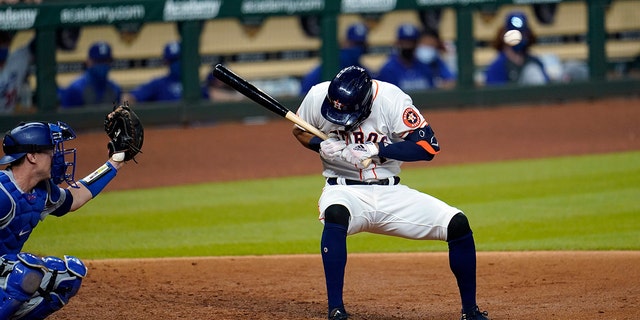 Houston Astros’ Carlos Correa, right, ducks from a pitch thrown by Los Angeles Dodgers relief pitcher Joe Kelly as catcher Will Smith reaches for the ball during the sixth inning of a baseball game Tuesday, July 28, 2020, in Houston. Both benches emptied after the inning. (AP Photo/David J. Phillip)

On the outside looking in, the pitches directed toward Bregman and Correa appeared to be a revenge measure against the Astros for cheating during the 2017 season.

An MLB investigation earlier in the year revealed an elaborate scheme set up by the Astros to steal signs and alert players when a breaking ball was coming. Astros staff members would bang on a trash can when they got the sign from a camera installed in centerfield at Minute Maid Park. The Dodgers would go on to lose to the Astros in the World Series that year.

Kelly, however, denied that he purposely threw at the Astros’ head.

“No. When I was with the Red Sox we beat them in ’18,” he said. “It’s one of those things that I pitch competitively. With no fans here, it’s easy to hear some stuff (from the opposing dugout) … there’s something they apparently didn’t take too kind to.”

“I really don’t know, to be quite honest,” he said. “I know he got behind Bregman 3-0 and lost a fastball. I really don’t think there was intent behind that. I think those guys took a little bit of offense. Even the one to Correa, that was a breaking ball that just backed up.”

Astros manager Dusty Baker said Kelly was chirping Correa but nothing was said to provoke the pitcher.

“What really enraged everybody … is when he told him: ‘Nice swing b—h’” Baker said. “What are you supposed to do then?”

Baker added: “We didn’t say anything. We don’t start nothing. But we don’t take nothing either.”

Correa and Bregman didn’t talk to reporters after the game.