In Barr’s prepared remarks, which were provided to CNN by the Justice Department on Monday, the attorney general says he has acted independently of President Donald Trump in the decisions he’s made in several criminal cases he’s handled.

“Ever since I made it clear that I was going to do everything I could to get to the bottom of the grave abuses involved in the bogus ‘Russiagate’ scandal, many of the Democrats on this Committee have attempted to discredit me by conjuring up a narrative that I am simply the President’s factotum who disposes of criminal cases according to his instructions. Judging from the letter inviting me to this hearing, that appears to be your agenda today,” Barr says in his written remarks.

Barr’s testimony on Tuesday is his first before the House Judiciary Committee, where Democrats have accused him of committing numerous abuses. It comes after he did not appear at a hearing before the panel last year and a March date was postponed. Democrats plan to push Barr on his intervention into the prosecutions of two Trump allies, his move last month to oust a prominent and powerful US attorney, and the Justice Department’s use of force against protesters to Barr’s threats to state and local officials over their handling of coronavirus. A Democratic committee counsel told reporters Monday that Democratic lawmakers will seek to paint Barr as repeatedly overruling career staff to serve the President’s interests first.

Barr will also face questions on his role in the administration’s crackdown on the protests across the country that followed George Floyd’s killing in May, including the decision to forcibly disperse a peaceful demonstration at Lafayette Square in June and the dispatching of federal officers to Portland, Oregon, where rioters have clashed with authorities nightly outside a complex of federal buildings.

In his opening statement, Barr said the President “has not attempted to interfere” in the criminal decisions he’s made, which would include lessening the sentencing recommendation for Trump’s longtime friend Roger Stone and to move to dismiss charges against Trump’s first national security adviser Michael Flynn. 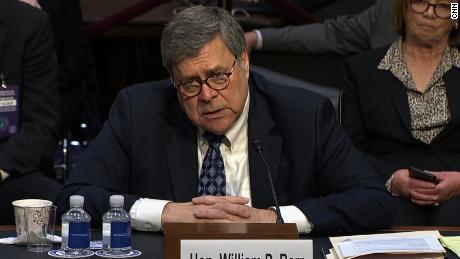 “My decisions on criminal matters have been left to my independent judgment, based on the law and fact, without any direction or interference from the White House or anyone outside the Department,” Barr will say.

The majority of Barr’s statement, however, is devoted to issues of race and policing, striking a tone that is decidedly defensive of law enforcement.

Barr calls the killing of Floyd “horrible” and says it “understandably jarred the whole country and forced us to reflect on longstanding issues in our nation.” He continues, however, by recounting the ways that policing in America has changed since “the Civil Rights movement finally succeeded in tearing down the Jim Crow edifice.”

He acknowledges that the Black community feels they are treated unfairly by police and calls the concern “legitimate,” but he rejects the idea of “deep-seated racism” within police departments.

And he calls the far-left movement to defund the police “grossly irresponsible” and suggests that a “recommitment” to a “basic and overriding obligation to treat each other as individuals” is a “worthy response to George Floyd’s death.”

Addressing Portland, where federal law enforcement officers from the Justice Department and Department of Homeland Security have defended a federal courthouse from nightly attacks by rioters, Barr vividly describes the violent showdowns and accuses local politicians and the media of misrepresenting and “tacitly (condoning)” the clash.

“To state what should be obvious, peaceful protesters do not throw explosives into federal courthouses, tear down plywood with crowbars, or launch fecal matter at federal officers,” Barr is expected to say. “To tacitly condone destruction and anarchy is to abandon the basic rule-of-law principles that should unite us even in a politically divisive time.”

This story has been updated with additional developments Monday.