ANCHORAGE, Alaska — Seven people, including an Alaska state lawmaker, died Friday when two small airplanes collided in midair near the airport in Soldotna, a small community on Alaska’s Kenai Peninsula.

Alaska State Troopers said state Rep. Gary Knopp, 67, of Kenai was the sole occupant of one plane. The other plane was flown by a local pilot, and carried a guide from Kansas and four people from South Carolina.

“This is an unfathomable tragedy for multiple families today,” Alaska Department of Public Safety Commissioner Amanda Price said. “Troopers and partner agencies have worked together diligently at the scene and have reached out to next of kin to notify them of this heartbreaking incident.”

“This is an unfathomable tragedy for multiple families today.”

The National Transportation Safety Board is investigating the fatal accident, which occurred just before 8:30 a.m.

Rita Geller, who works at a golf course near the airport, said she started running when she heard the planes hit, and watched one fall to the ground,

“I ran to more of a clearing and basically saw it explode,” she told the Anchorage Daily News. “The engine, things were flying off of it. I didn’t see the second plane, but I saw a lot of debris flying around. It was horrific. It was just like 9/11.”

Troopers say six of the seven people were pronounced deceased at the scene of the accident. The seventh person died while being transported to a hospital.

Other victims from Kansas, South Carolina

Bell was one of the owners of High Adventure Air Charter in Soldotna, which offers bear viewing adventures, fishing and hunting trips and glacier tours, according to its website.

A person who answered the at the charter business Friday afternoon said the company had no comment.

“We live in a small, tight community here in the Central Peninsula. When I heard the horrific sounds of a plane crash this morning, which occurred very close to my home, I knew there was a high probability it involved someone we knew well,” state Sen. Peter Micciche said in a statement.

“I have known Gary Knopp and Greg Bell for most of my life. Gary has served the Kenai Peninsula community for decades. I have flown with Greg and never felt to be in better, more safety-focused hands while in the air. We are reeling from the loss to our community,” he said. 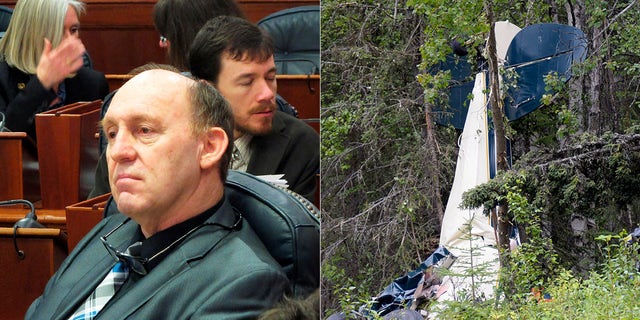 Alaska state Rep. Gary Knopp, 67, of Kenai was among seven people killed Friday when two planes collided, authorities say. At right, the crumpled remains of one of the planes are seen outside Soldotna, Alaska. (Associated Press)

Gov. Mike Dunleavy ordered U.S. and state flags to be lowered to half-staff and to remain in that position of honor for Knopp until sunset Monday.

“The first lady and I wish to express our heartfelt condolences to Rep. Knopp’s family as they mourn his untimely passing,” Dunleavy said in a statement. “Throughout his 42 years on the Kenai Peninsula, Gary became well known as an avid outdoorsman, a skilled pilot, and a dedicated public servant. His presence will no doubt be missed by those he faithfully served.”

House Speaker Bryce Edgmon of Dillingham said he was shocked and devastated upon hearing of Knopp’s death. “Gary was a one-of-a-kind leader and a true Alaskan who worked tirelessly for his district in the Legislature. He will be missed by many.”

Senate President Cathy Giessel, a Republican from Anchorage, called it “a heart-breaking tragedy. More than a legislator, Gary Knopp was a husband, father, son, brother, grandfather, and friend. He will be tremendously missed.”

The Federal Aviation Administration initially said the two planes involved were a single-engine de Havilland DHC-2 Beaver and a twin-engine Piper Aztec, However, the FAA later said it did not believe the second plane was a Piper Aztec, but it had not yet confirmed the make and model of the airplane involved.

The NTSB later tweeted the second plane was a Piper PA-12.

The FAA sent two investigators to the crash site, which is about 150 miles (241 kilometres) southwest of Anchorage.

Knopp, a Republican, left the House GOP caucus and served in a coalition of Democrats, independents and GOP lawmakers that comprised the House Majority. That left the remaining House Republicans in the minority.

Knopp faced two Republican challengers in the Aug. 18 primary. A message sent to the state Division of Elections to see if Knopp’s name would remain on the ballot was not immediately returned.

Knopp was first elected to the state House in 2016, and served for years before that on the Kenai Peninsula Borough Assembly.

He was born in Whitefish, Montana, and moved to Alaska in 1979. He eventually settled in Kenai and worked as a general contractor.

His hobbies included flying , diving, hunting, golfing “and enjoying life in general at home on the Peninsula,” according to his legislative biography.