Navy veteran Chris David, 53, told CNN over the phone Sunday that he had never been to a protest, but felt “enraged” when he saw federal officers on the scene and wanted to ask them what they were doing there.

“I was going to ask why they weren’t living up to their oath of office, the Constitution,” David explained. ” All I wanted to do was ask them why?”

He put on his Naval Academy gear with the hope they would listen, and would feel like he was one of them. What he was met with couldn’t have been further from that. 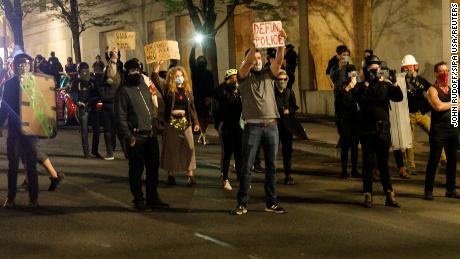 When approaching them to talk, David said they pushed him down, and started beating him with their batons and using pepper spray.

“I was hoping they wouldn’t shoot me, because one had a weapon pointing it right at my chest, ” said David. “I’m relieved that I only got hit by batons and pepper spray.’

When asked how he was able to not react during the beating, David said he knew if he acted it would escalate the situation.

“The baton hits weren’t the issue but when they used pepper spray it was over; it felt like they dumped a gallon of burning gasoline on my head.”

He says he suffered a broken hand in two places, and plans to have surgery later this week.

David said he doesn’t want his story to take attention away from the original reason for the protests which is Black Lives Matter. He wants the public to know that the people going down there to protest “are just like him, normal people.”

When contacted by CNN, a spokesperson for the Portland Police Bureau said that their officers were not involved in the incident.

Customs and Border Protection also told CNN that their officers were not involved.

CNN has reached out to the Department of Homeland Security and US Marshals for a comment but has not yet heard back.